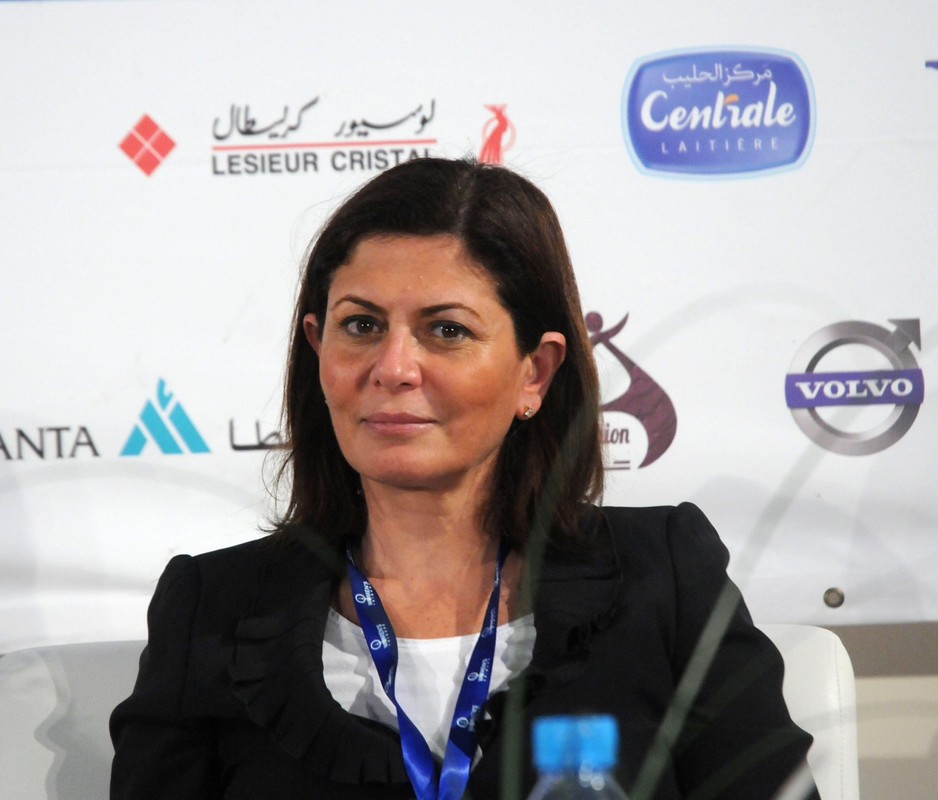 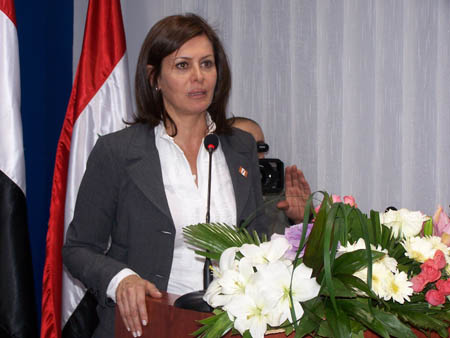 Hind has led a variety of public diplomacy efforts in recent years in Syria to promote interfaith tolerance and cooperation, modernization and reform, as well as educational innovations in conflict resolution and diplomacy education.

She was awarded in 2007 the Peacemakers in Action Award from the Tanenbaum Centre for Interreligious Understanding in New York, and also the Public Diplomacy Award from CRDC, George Mason University in 2009.  In 2009, she was appointed as the Ambassador of Conflict Resolution and member of the Global Agenda Council on the Future of the Middle East, World Economic Forum, Davos. Presently she is at the Advisory Board for the World Bank in the Middle Eastern issues. She is also a member in the Global Agenda Council for war intervention, World Economic Forum.

UFFP met her last fall in Essaouira Morocco at the Women’s Tribune. United Fashion for Peace webzine was media partner of the event then. 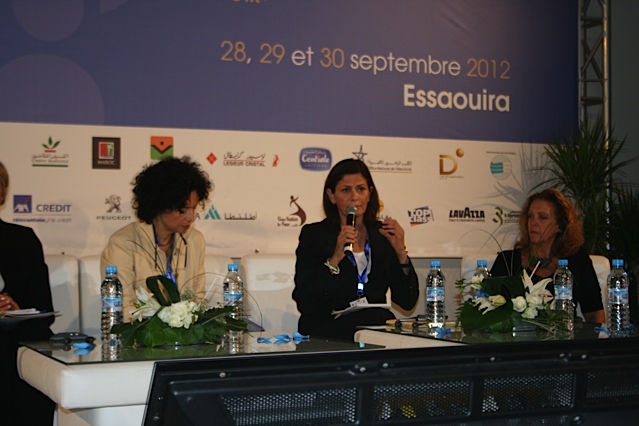 An opportunity for us to tackle the many issues in Syria, Tunisia and the Arabic World after the arab Awakening and the many dilemmas women are confronted with since the historical movement that led to the fall of some dictatorships (  Tunisia, Egypt, Lybia) and the blood bath and repression in Syria, while  still facing  up to Assad regime.

Two women a Tunisian one and a Syrian one, exchanged heart to heart.

How do you imagine a Post Assad Syria? In reality tell us about the situation of women in Syria?

Everybody is concerned, the World think that the Jihadists will take over eventually if Assad departs, but I can assure you that in Syria  it will be different.  In reality, I see that Women are not worrying about the future.  I  can also tell you the story of this young girl in the liberated area of Syria telling me that she wants to become the first elected Syrian President.

You also had the opportunity to meet and work with women refugees, what are the main difficulties? How could we help?

Their main difficulties are to get their bare necessities with their daily life, bread, milk and medicine…. But they are still very brave and resilient, what keeps them going forward is  their strong ties  for their families and trying to keep them  in hope and love.

We still  can help a lot in sending them moral and financial support. To let them know that they are not alone !

The blood bath in Syria unfortunately seems to be considered like a fatality in the region, how would you explain this state of fact? What would you expect brotherly and Arabic countries to do?

Unfortunately, they are using Syria as a proxy war and the Syrian people are paying the price. A war between Iran, Russia again the west.  At this time, I sincerely don’t know, how long this will last.

Can we really have a say in front of such a totalitarian regime?

For sure and we are proving it no matter the cost of lives. The Syrian people followed the footsteps of their brothers and sisters in Tunisia and Egypt and they rose against the oppression.

The post Arab awakening was not successful in many countries like previous modern and secular  Tunisia, a country known for its modernity laicity and dialog between religions and cultures, how do you see what is currently happening in Tunisia?

Tunisia  a great Nation, what is happening now is the post the revolution period, it is normal, but I can see Tunisia will be better than before, you did achieve something very important you are the role model of all the Arab countries !how you raised peacefully against the Dictator, What is happening now is normal, look at  the  French revolution, it took them 100 years to settle, I am not saying that you need a hundred years. I am telling you that  even if the Islamists want to  lead the country in the 21 century, they will try but they will fail !

The liberals should be prepared to take over, they need to get down to the grass roots work with the poor and not letting the Islamist influence the society. They should do their job. Get there and beware and be active !

A negative islamist scenario in Syria is not possible?

Syria is different, we are a mosaic society, we lived there for a long time, even our Islamists are moderate, I traveled to the liberated Syria with my cross, showing everybody that I am Christian, I find only love and respect, we need to stop this propaganda about the failed states and the sectarian wars, in Syria there are  many Sunnites supporting the regime and many alwaites  for the revolution, we have so many Christian opposition leaders and we have as well so many Sunnites who are pro regimes. So we need to stop this propaganda.

What would you like to say to your Tunisian sisters and the wife of the political opponent  Chokri Belaid that has been murdered these last days in Tunisia?

To still keep the hope and  the faith to keep fighting for justice and democracy, you still  have the sunshine of the Arab spring, keep on fighting, what you Tunisians did,  is an amazing thing, you got rid of the dictator in a peaceful revolution, History will write about your struggle the “jasmine revolution” will live forever in the mind of people.

Please stay strong, in every post revolution, we face difficulties but still the hardest was done. Hand in hand we can build our societies in dignity and respect. But we need to be involved, get there. Influence the people and work on the ground roots of our problems. 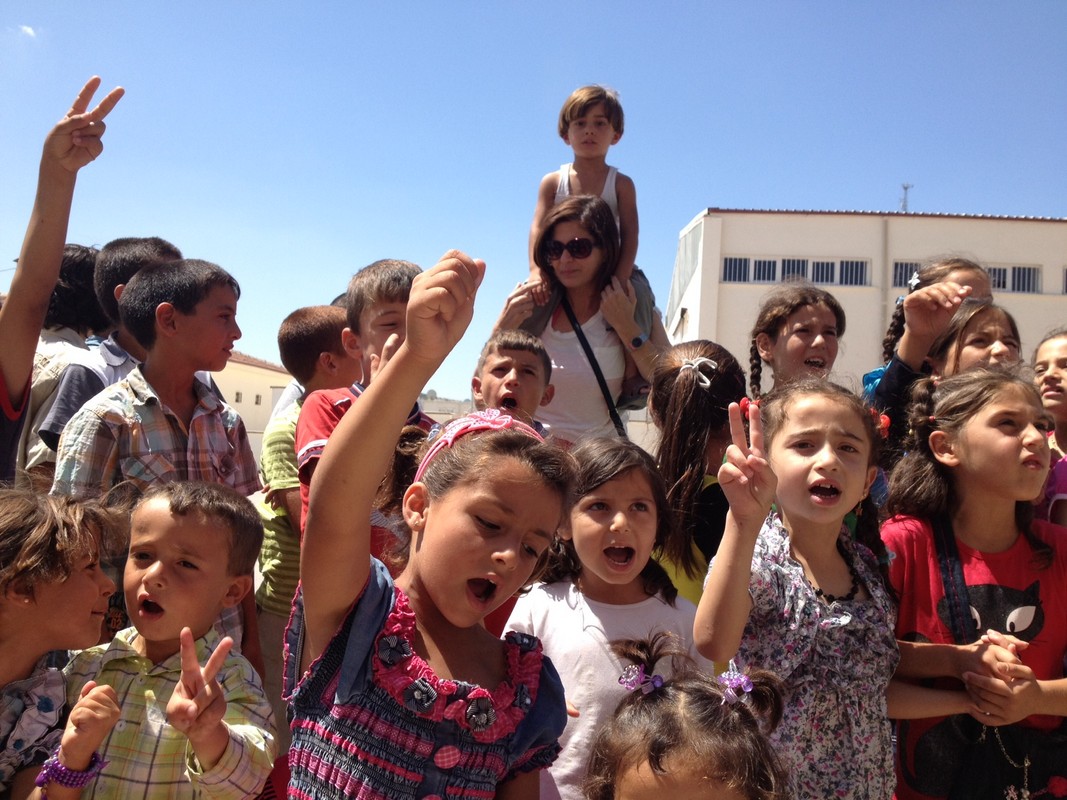 Women are always the targets, yet they are always in the front row as well? 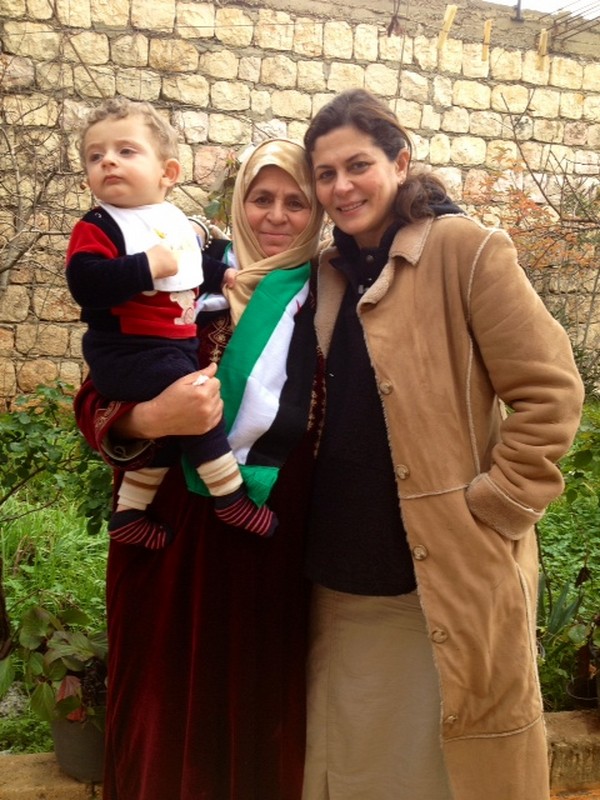 Sure, and they are the one that will build the society, I find so many women who are giving their children hope,by pushing them to continue, to have faith….

Women are the only hope, they are not corrupted, they don’t have a hidden agenda but the most important thing, we must know about them, is that they are peace makers and builders, they are not warriors of in search of power of conquest like men. Give them power, they will give you peace !

What would you like to say to your Arabic sisters? Those of the rest of the world fighting against repression?

Stay united, help each other, and support each other’s, we need to live in liberated countries, free in respect and dignity. And this scenario is possible if we get rid of dictatorship.

So, we need to keep fighting the good fights, focus on Education and Humanitarian initiatives. Get our messages of hope spread by ethical medias, like yours…

Politics also have a role to play but in a healthy way and for the better of people…. For that, coordination and coalition, are  the key of success.

And to UFFP readers, according to you Hind,what are the keys of resilience in front of any kind of totalitarian and repressive regime?

The civil resistance will be always the best solution, to find a way to get rid of Dictatorship without violence, unfortunately what happened in Syria, showed this scenario was not fruitfull.  Assad  Regime forced  civilians to use weapons. We had no choice.

What would you like to say to UFFP readers, to  help Syrian, Libyan, Egyptian and Tunisian and also Malian sisters, in front of violence?

I would like to say to the international community as well as the readers, to remember that there are so many women suffering, they need to know that you are there for them, we need to support each other’s in all the way we can…

Syrian women today, need humanitarian aid, moral support they need to know that they are not alone in the struggle for freedom !


Mots clés: a role Model to Syria" !, Hind Kabawat « Tunisia when she rose was and still is