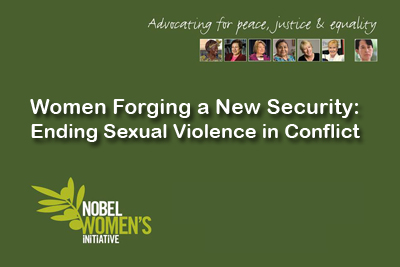 Campaign members—which include over 400 organizations around the world including Physicians for Human Rights, Human Rights Watch, the Global Fund for Women, the Sonke Gender Justice Network, Femmes Africa Solidarite, AIDS Free World, Panzi Hospital and the Women’s League of Burma—are concerned with the lack of coordination between existing local, national and global efforts to stop rape and other forms of gender violence.

« I witnessed the power of women coming together and demanding a stop to violence in Liberia. When we all come together—men and women side-by-side all around the world, and say no to rape, no to gender in-equality—I believe that we will be able to shake the world into hearing what we have to say, » said Leymah Gbowee, the newest recipient of the Nobel Peace Prize for her mobilization of women which helped end the civil war in Liberia.

The Campaign is demanding urgent and bold political leadership to prevent rape in conflict, to protect civilians and rape survivors, and call for justice for all—including effective prosecution of those responsible.

« How many of us need to be raped before the world says no? Just look at what is happening right now in Mali, the Congo, Colombia, Burma and so many other countries, » says Nobel Peace Laureate Jody Williams, and chair of the Nobel Women’s Initiative and co-chair of the Campaign. We are launching the Campaign to finally bring an end to this senseless violence and bring us all closer to peace. »

In conflicts on all continents, rape is used as a weapon against members of both genders as battles increasingly move into communities. This type of violence is employed by rebel and insurgent groups, armed gangs, as well as government troops—with various motives, ranging from tactical to personal. Rape causes psychological and medical trauma, with reverberations continuing for decades.
While data on rape tends to be highly inaccurate due to the extreme stigma attached to survivors and the failure of reporting mechanisms, it is clear that the problem is pervasive in many conflict zones.

Recent research found that within the entire country of the Democratic Republic of Congo, more than 400,000 women were raped between 2006-2007. The high number demonstrates how gender violence has moved beyond regions where military operations take place and violence is a factor in daily life, with 48 women raped every hour. On the opposite side of the world in Colombia, the most recent survey on gender violence found that in the 407 municipalities facing active insurgencies, almost 500,000 women reported being raped between 2001-2009—six women raped every hour.

A virtual component to the Campaign unites supporters online at www.stoprapeinconflict.org. All are encouraged to Take the Pledge in support of the Campaign. During the Week of Action, all are also urged to make a personal pledge and share an action they will take within their own community for the Campaign.